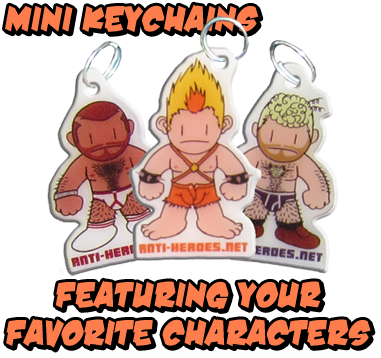 Behold my latest perversion. Well, not quite my latest per se. I’ve been drawing these since I was 8. But when I told my friend and fellow illustrator, Julain Lytle about them, he clued me in on something that hadn’t quite entered my head– that these guys were pretty marketable. Specifically he said that girls who go to comic cons would love them. Now, since I kinda “don’t do” comic cons, I thought, how could I translate these for the cons I DO participate in (gay erotica cons?) Thus, Bulgy Buds were born.

These guys are actually made from Shrinky Dinks if you can believe it! Kudos to you if you remember what Shrinky Dinks are. If you don’t suffice to say I had tons of fun making them.

And they seemed to be a big hit at the Black Party Expo, which I just participated in yesterday. I agonized over whether to do only my characters or versions of better known ones. I ended up doing both, and as it turned out, both sold equally!

So yeah, if you like what you see, gwan and order some on Shop.Anti-Heroes.net. I’m doing packs of 3, 5 or 10 for you greedy collectors out there.