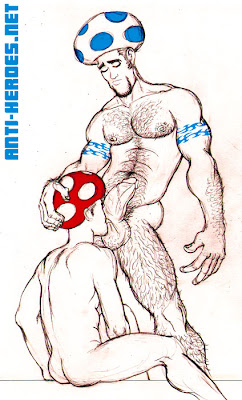 “Oh, geez, another Toad post? Why does this guy like frikkin’ mushroom people so much? It’s frikkin’ weird!” LOL, I know, I’m sorry. But I am really excited for the new Mario game coming out this weekend. Not only will I finally get to be Toad again, but it’s a multiplayer sidescroller! …People, a MULTIPLAYER SIDESCROLLER! (cue spaz out) 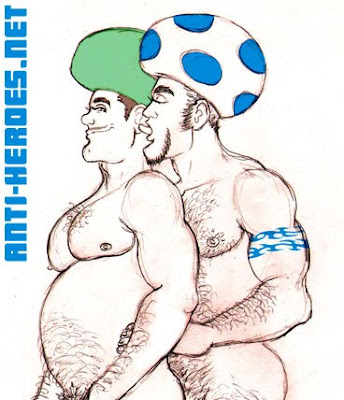 The models were very hot. Blue Toad in each of the poses is Doug Repetti, a hunky gay man about town who’s solid muscular body and ample genitals were a pleasure to draw. The other Toads are Adam, a model I’ve drawn so many times before that I decided to give him a different body type in every pose to keep it interesting to me. But the result makes Mr. Blue Toad look like the slut of he century! hehe! 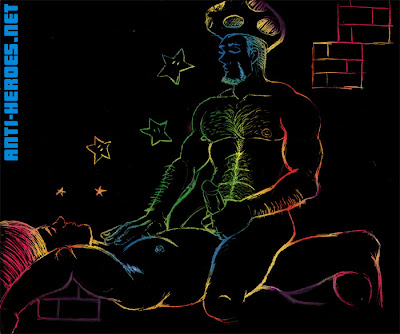 Above is an experiment using this crazy paper Anthony had. It’s black wax or something, and then you scratch it away to reveal a multicolored pattern underneath. It was difficult to scratch if you don’t have the right tool. Also, there’s no erasing. But it made for a cute, fun drawing. 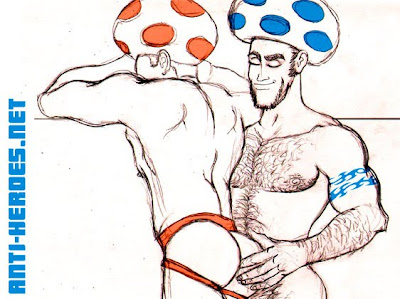 My Twitter followers know that a few weeks ago, I was home alone a lot and since I have no cable at the moment, I decided to watch all of my Super Mario animated series DVDs. I LOVED that cartoon as a kid and all my memories of why I liked Toad the most came flooding back. He as so awse. Here’s a screenshot from the episode that spoofed Mad Max where he became the TOAD WARRIOR. Get it? SO CUTE!

Toad was such a huge part of the toon but whenever that little bitch Yoshi came along, they unapologetically omitted Toad. That began my hatred for that bastard dinosaur. But now finally, come Sunday, I will get to control Toad, riding Yoshi like the subservient little punk he is, punching him in the face to get him to eat goombas. 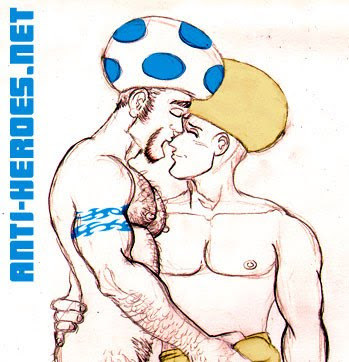 Also, I’m over my issues with Toad being a race rather than one specific character these days. If he’s a race, then my drawings of hunky Toads that fuck each other are more justified.

The Game I’ve Been Waiting 20 Years For

By JC | Fan Art, muscles, Nintendo, Toad (Nintendo), video games, videos | One Comment
A simultaneous multiplayer platformer. My prayers have been answered. And finally my dream of being able to play as Toad punching Yoshi in the face can be realized! 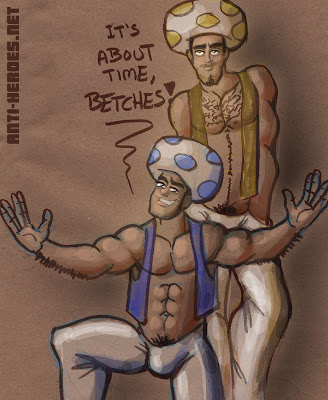 So, I have been playing MarioKart Wii. Remember, I vowed not to buy any Mario games that didn’t include my boy, Toad as a playable character. Well, he’s in it and is once again an excellent competitor. I kinda can’t stand his voice though. Why do they make him sound like such a tool? And I don’t like how he doesn’t get legs. What’s that all about? Ok, I realize in his first game as a playable character he was a sprite swap of some guy in baggy pants and a turban. But what if us old school purists liked that Toad best?!
0

By JC | anthro, cutesy, Fan Art, Nintendo, rant, Toad (Nintendo), video games | 11 Comments
Thanks to everyone for the positive response to my 1st post. Now, on to some random esoteric rantings. 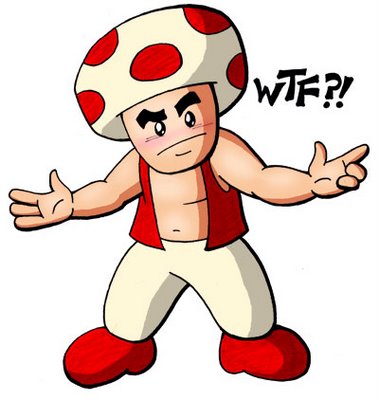 What’s up with Nintendo dissing my boy Toad lately?! He’s not playable Mario Hoops and is reduced to a race in MarioStrikers! Maaan, these were the 2 games I’ve sooo been wating for! Ever since Acme All Stars , I’ve been wanting a soccer or basketball game featuring cute characters I like with cool moves and powers.

And what do they do? Downplay the coolest character they ever came up with! I’m sorry, how does DAISY get a spot on MarioHoops and not Toad? Toad is one of the first! That’s who everyone picked to beat Mario2! And he was the man in the old Mario Cartoon, too.

So yeah, if anyone at Nintendo is reading this, note that I am not buying any more Mario games until Toad is playable again.