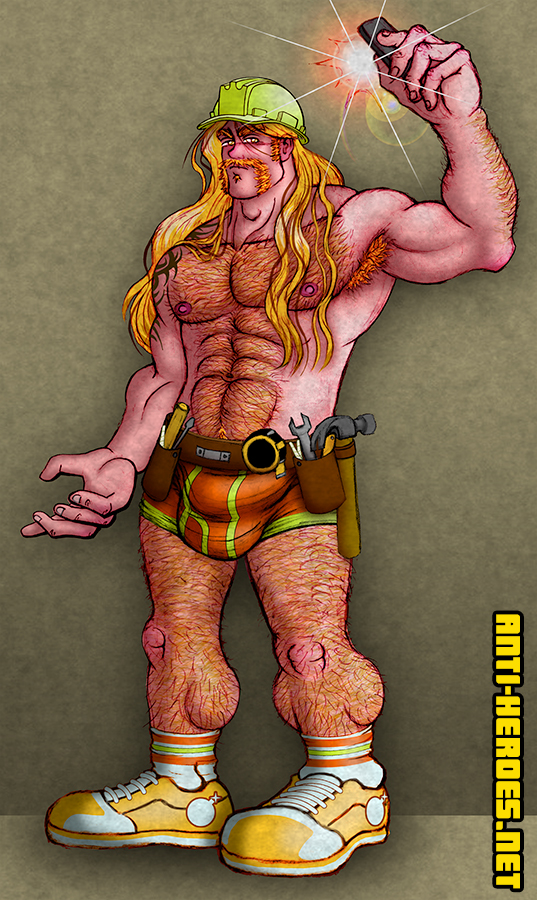 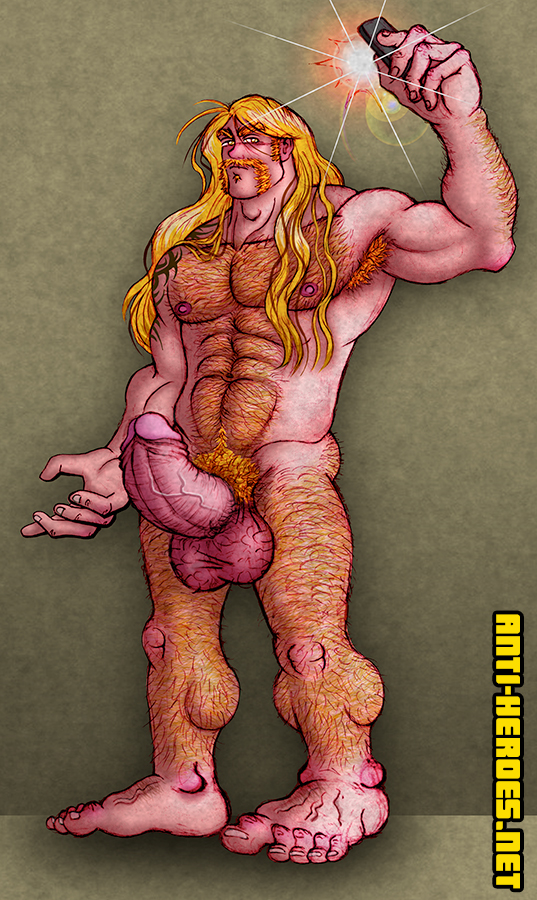 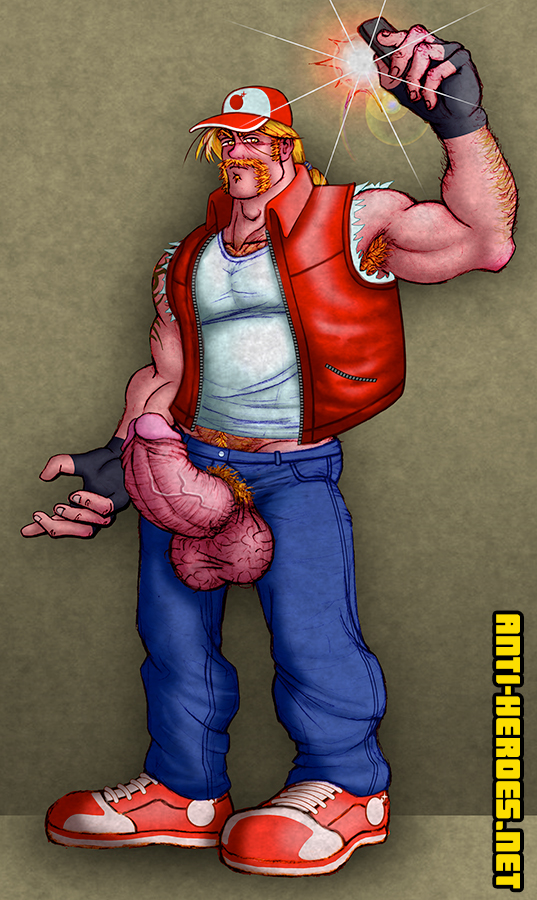 Dom’s a newer character so his character study page is not as deep as Caleb’s. Most of it is drawings I have in other sections but the new set is above, showing your favorite burly blonde and his fatty stuffed into some sexy outfits. ENJOY!

Another Blast From the Past

Thought I’d put this old stuff out there– I’ve lately been interested in my progression as an artist, so it’s interesting to go back and review past work. All of this stuff is circa 2001, where marker was my primary medium and I was only getting started with digital coloring.

This Electric Lace series was trying to incorporate graphic design with illustration as a point of interest. They look horrible to me now– and do nothing to show my design skill, but at the time I thought this was a good idea. Notice how the subject matter is pretty risque, particularly taking into account that these were supposed to be examples of non-erotic work. This is what I mean when I always say that erotica was always subtly coming out in my old work. Granted, in marker techniques class, the usual assignment was to render a hot sexy girl from Maxim or something. So I guess my subconscious erotica-lean has a bit less to do with this than I may want to claim. 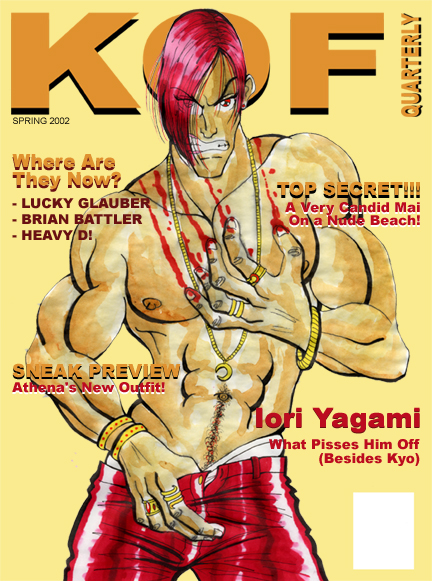 KOF Quarterly is also trying to show some sort of type design skill but I can hardly look at this piece now. Besides the dreadful early attempt at watercolor, there are so many type design errors, I can’t believe I ever had this on any site– lol. I may redo this piece for the “Draw This Again” meme because I love Iori and don’t feel as though I’ve represented him properly in my art. 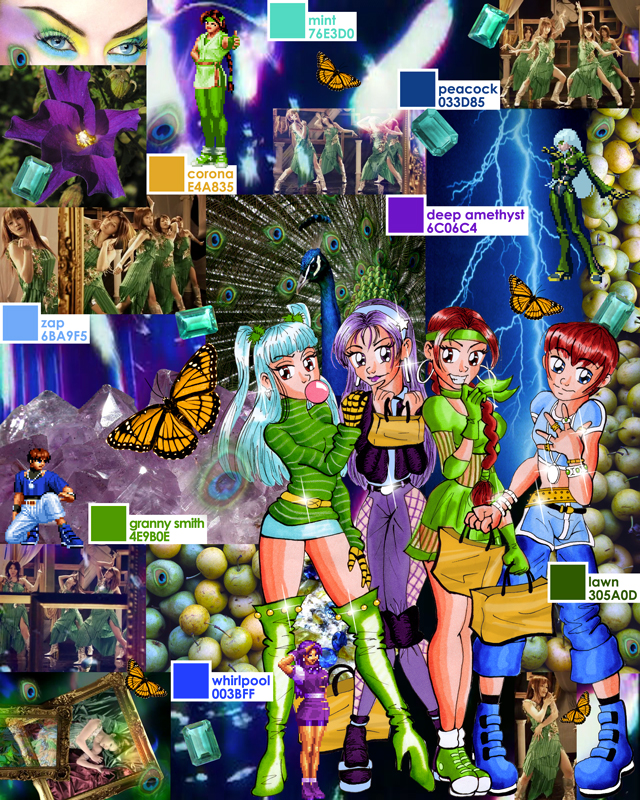 Next up is a color story mood board. Making stuff like this was one of my first jobs out of school. I took a drawing I did for a KOF fan art contest and collaged it with harmonious colors– another attempt at incorporating illustration and design. I must say though that this was the beginning of me recognizing that I have a pretty good color sense.

Finally, we have another piece form the KOF fan art contest. I think the rules were to make the art into an e-card or something. LOL that I’m still using that same flare today.

And speaking of my Daddy/Boy series… 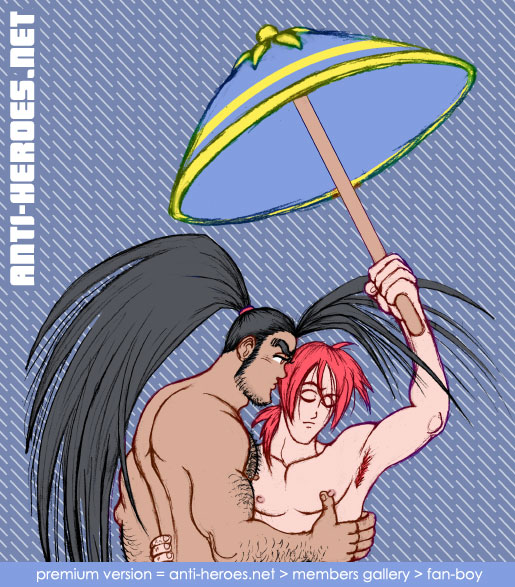 Shizumaru: I just don’t know… I’ve never had one that big before…

Haohmaru: I promise I’ll go slow. Ease it in, give you time. Before you know it, you’ll be in so much pleasure, you’ll never want it to end.

To see the full version (cuz you know you want to) go to anti-Heroes.net > members gallery > figure drawing.

As the Tears Flow

By JC | Capcom, King of Fighters, rant, SNK, Street Fighter, video games, videos | 5 Comments
A trailer for King of Fighters 12 has been released and it looks so fucking beautiful, it makes me want to sob.

For those that don’t know, The King of Fighters is a long-running fighting game series produced by SNK/Playmore. But what makes KOF12 so hot is that they’ve set out to make the MOTHER of all 2D fighters, redrawing EVERY sprite in HD and upping the animation frame-rate more than double what it was! What I’m tryna say is that the animation is so good, it frikkin’ looks like you’re playing a Disney movie!

This must come as such bad news for Capcom and the Street Fighter 4 camp, who (controversially) decided to abandon 2D for their popular franchise. They thought 2D was dead. Oh, ye of little faith. Part of me feels bad for Capcom because by making the game 3D, they’re competing with the likes of Soul Calibur and Tekken, a battle they’re destined to lose.

SNK/Playmore is basically “running unopposed!” So, kudos to the folks over at SNK/Playmore for believing in 2D and thusly believing in the fans that made their franchise so popular. And Capcom? Well, sorry ‘cuz Street fighter 4’s gonna look like a hot mess when compared to ANY of the other fighters coming out.

“C’mon, let’s FIGHT!” was what the main characters of this 1986 NES classic shouted before unloading their semi-automatic weapons into the jungles of their 8-bit universe. I’m speaking of Ikari Warriors, a rare game I never actually owned. A friend of mine had it but whenever we played, it would freeze on like the 4th stage. My friend was convinced that it was because he had roaches in his Nintendo and I told him that didn’t make any sense. Then, sure enough, one day we were playing and a cockroach crawled out of his Nintendo and the thing froze. I never played Josh’s Nintendo again after that.

ANYWAY, yeah, random tangent. The characters from this game would later be much more fleshed out in SNK‘s fighting game super-franchise King of Fighters. KOF, as it is called by fans, is the main rival to Capcom’s Street Fighter, and the Ikari Warriors: Ralf and Clark have been in all 10+ installments of the game. Clark is quiet, reserved, and never removes his shades. Ralf is loud, boisterous, and takes a swig of beer before each match. The two are military partners and inseparable friends (which of course leads fans to pair them up romantically!) So yeah, enjoy my version of the Ikari team in all their dangling glory.