I’ve been reminded by all the amazing artists out there who draw Hank McCoy’s earlier incarnations, that original Beast is kinda one of those gay men quintessential ideal studs. Hairy, muscular, with those big hands and feet— what a hottie! 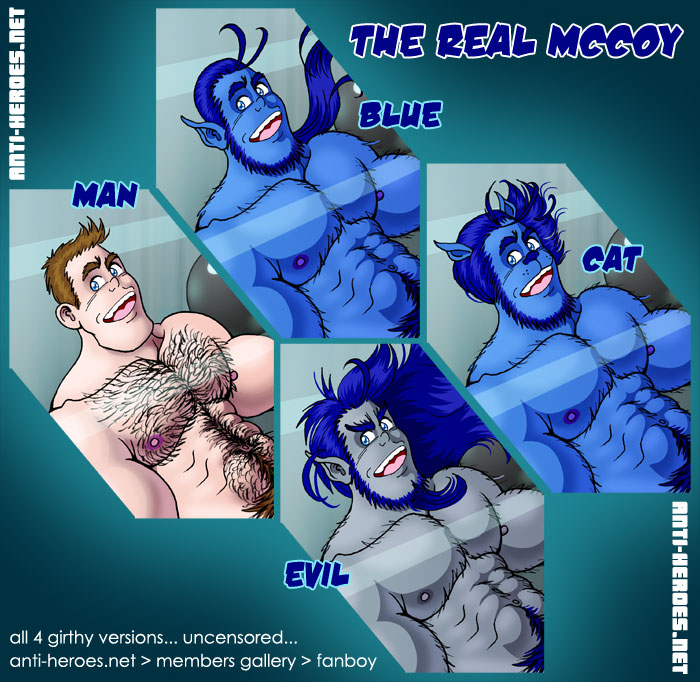 And thusly you have this piece, one of my more sexy pinups, with 4 variations to choose from. And by the way, I draw the Beast’s cock and nads as thick and juicy as the rest of him.
Anti-Heroes.net > Members Gallery > Fanboy Stuff. Enjoy!

Is it just me or does this look lower than Sci-Fi channel quality….?
I mean… really, Fox…?

Forge What You Must 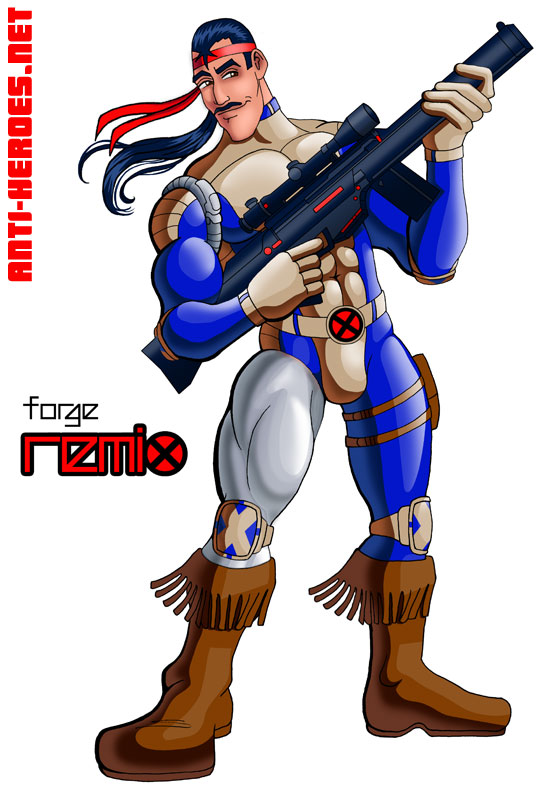 Boy, was I mad at Forge for dumping Ororo in the 90’s- haha. But now he is in better graces with me as I am in protest over what’s happened to him lately. Oh yes, before offing him they turned him into an elderly crackpot villain. So yea, yet another minority X-Man is now a crazed bad guy.

In my U, Forge is sane and fucking hot as hell. I took great care to give him Native American features, and I think it made for one of my hotter pinups. I even gave him an authentic Cheyenne enorgantic penis! (Legend says they were hung like horses! LOL) And unlike my usual X-Men Remixes, the X-Rated version is FREE today, right here on the blog. Why? Well, it was my birthday yesterday and I’m still celebrating. (Although that’s weird– YOU DUDES are supposed to be giving ME the presents!) 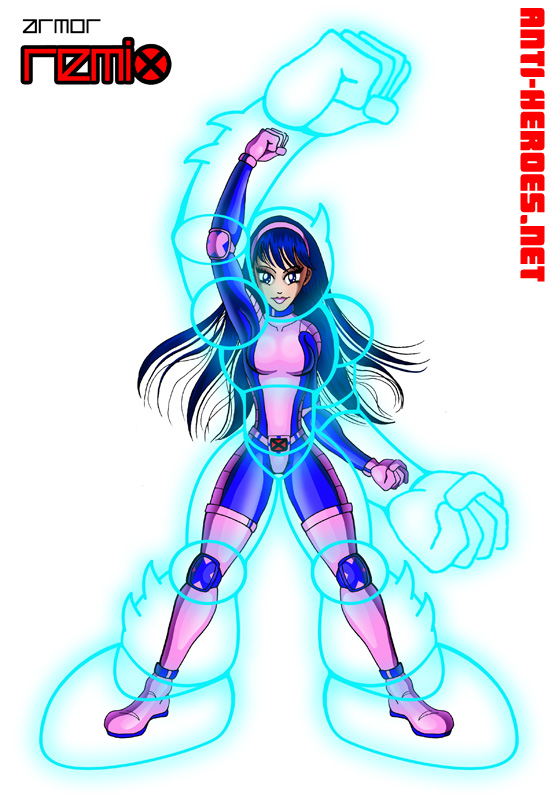 I’m not in love with Hisako mainly because she seems like the reiteration of a character I was gaga for in the 90’s. Unuscione was this fierce big-haired brunette Acolyte (who looked a little like Brooke Shields) and commanded a psionic exoskeleton very similar to Hisako’s armor. Unuscione was severely underused, in my opinion, and I truly believe that with such cool and unique powers, she could have gone far.

So, I guess I don’t hate Armor because I’m glad to see that the power is getting used in an active character. I do however resent how quickly she rose to the status of Wolverine’s sidekick. I’m all reading Ellis’ Hisako and she’s all calling Logan fat and I’m all like, “Who the hell does this little gunt think she is? You don’t talk to Wolvie like that!” 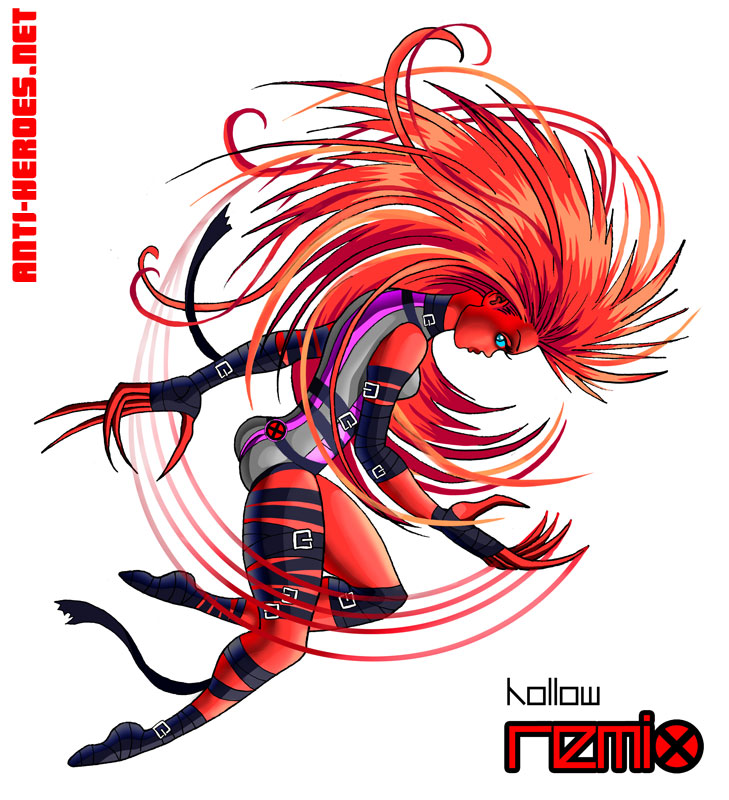 Ok, so I’m only using “Hollow” as her codename because I genuinely think it’s cooler than “Penance.” It has nothing to do with any kind of support for what Marvel has done to Speedball. Robbie is Speedball, Red Claw Girl is Hollow, and NOBODY is Penance- haha.

A tricky one, that Red Claw Girl, because like so many characters of her time, she had great potential but was pretty much ruined due to the constant changing of hands. Original Penance, this mute girl with the savage killer instinct, (um, Laura Kinney anyone?) was cool. And I think I speak for pretty much everyone when I say we were all on the edge of our seats waiting to learn this intriguing character’s origin. All we knew was her birthplace (Yugoslavia) and that she was Emplate’s bondage slave or whatever.

So can I speak for everyone again, for when the origin was finally revealed, not only were we confused as hell but pretty let down also? Making her “the real M” just negated any real origin story and totally erased a great viable character.

My theory? Well, Lobdell said she was Yugoslavian– and after he left, no one wanted to research what was happening in that part of the world and write a backstory involving her living in a war torn foreign country. So they just made her M.

The salvage, it seems, is that Penance still has a consciousness, who we now call Hollow. So… the Penance/ Hollow entity was a person all the time and her personality was just… usurped when Emplate put Monet in her body…? This origin would confuse even Psylocke.

In any case, I love this drawing. It’s one of my faves so far, if I do say so myself! 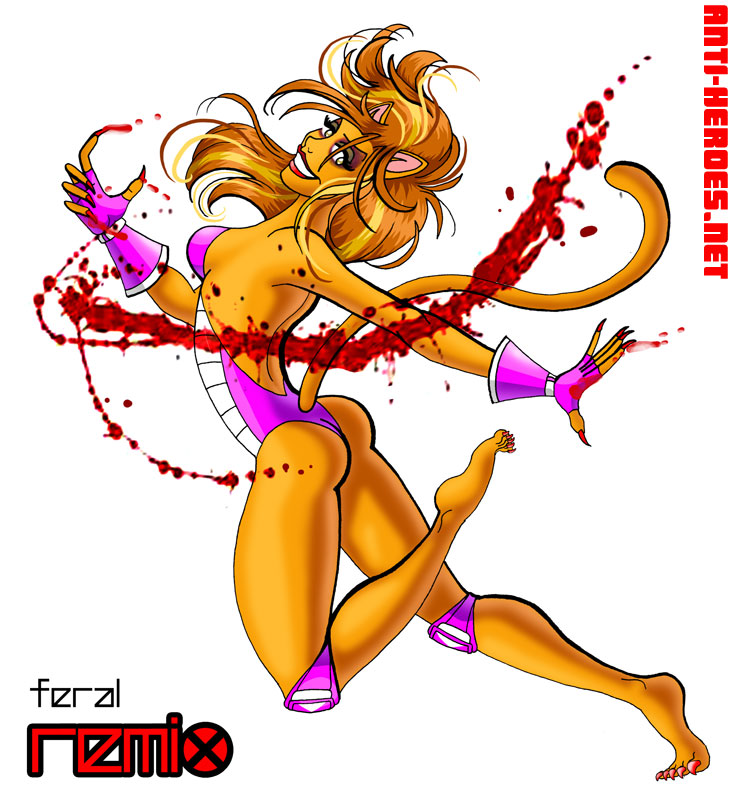 Rahne whupped THAT ASS! Cannonball had X-Force fall back and Feral was like, “No argument here.” HAHAHA!! For some reason, that made me love Feral. The fact that she (and Nicieza) recognized that even though Feral was a Wolverine rip, she had her weaknesses… namely the previous Wolverine rips. HAHA.

I felt that after this, Feral’s more conniving and manipulative traits would begin to come to light, since she obviously wasn’t the savage psycho she initially tried to project. But instead they just made her a traitor. At the time, I wasn’t so bothered because man did they draw her ugly. Only a few artists draw Feral cute and kudos to them.
Ugly cat-girls shouldn’t exist, I don’t care how evil they are. 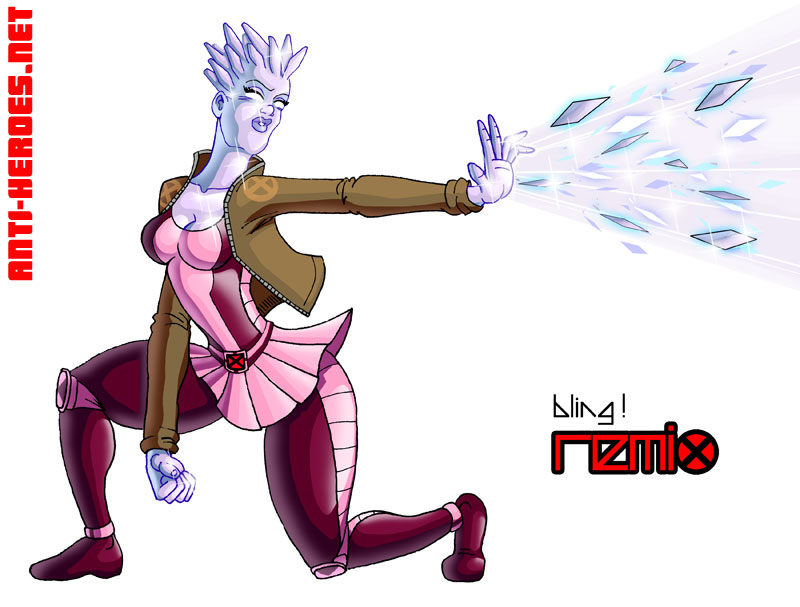 For those who don’t know, Bling! is the lesbian, mutant, junior X-Man daughter of famous fictional Hip-Hop stars in the Marvel U. If a character like Bling! can exist and not be considered a joke, then PHAT deserves a lot more respect.

For the final day of my X-Statix Tribute Remix Series, I’ll give you sexy, woofy Vivisector! 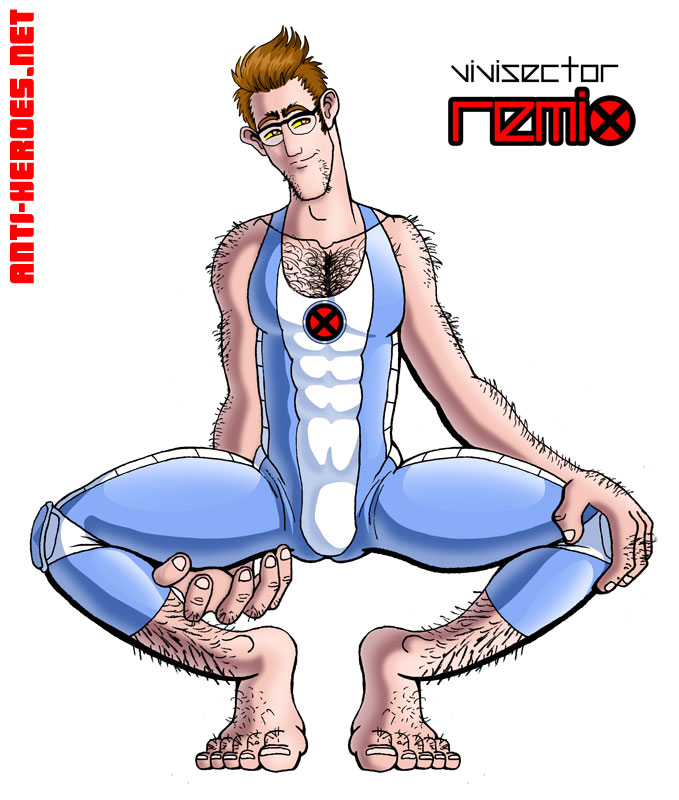 ROLL OVER for WOLF VERSION. CLICK for XXX-WOOF VERSION!!

An awesome character with kind of a boring, redundant power, Vivisector was the resident brain of the group but unlike your typical smart-guy of the team, Miles was just as flawed as the rest, typically getting drunk and picking fights with the team to get more fans and air time.

When he and Phat pretend to come out, Vivisector actually stays out and has to deal with the public’s aversion toward the “intellectual gay guy.” That’s what I love about this title. He recognizes that he’s unpopular but can’t seem to do anything about it. So meta. I imagine though, if he was drawn like how I do ‘im, he’d develop a fan base… particularly one of gay otter chasers! 😉

MERRY X-MAS boys!! Sorry this post wasn’t holiday themed, but I had to continue the series! And if you really want a gift from me, click the above image for a free hairy ween x-rated version! 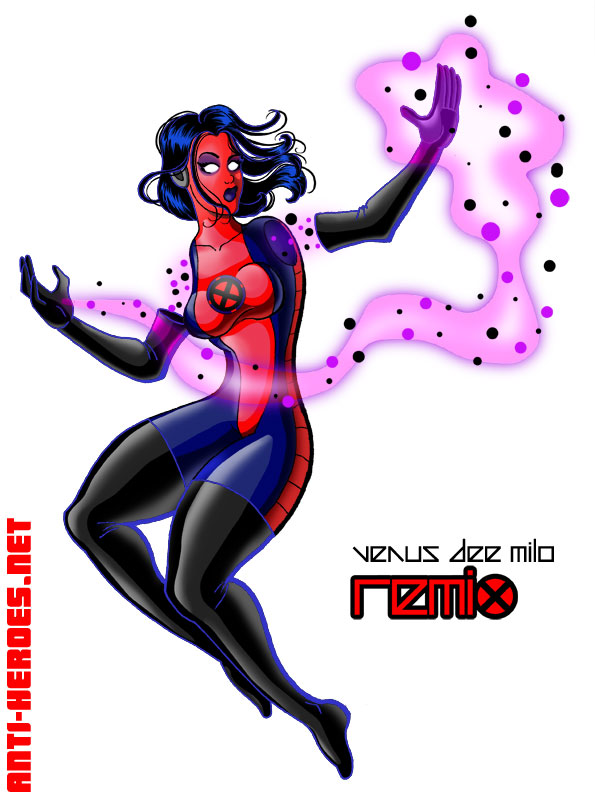 Honestly, she was my least favorite in the series as she was literally brought on to replace U-Go Girl… but… was just not as cool… or fun. The character however does realize this and is jealous of U-Go Girl despite never having met her! So her storylines mostly deal with living in U-Go Girl’s shadow. Her power, another weird for the sake of being weird one, was that she was an entity comprised purely of mutant energy which can heal, teleport and hurt enemies. Professor X designs a containment suit for her and in one of his more memorable guest appearances in the series, offers her a suit that allows her to fuck. 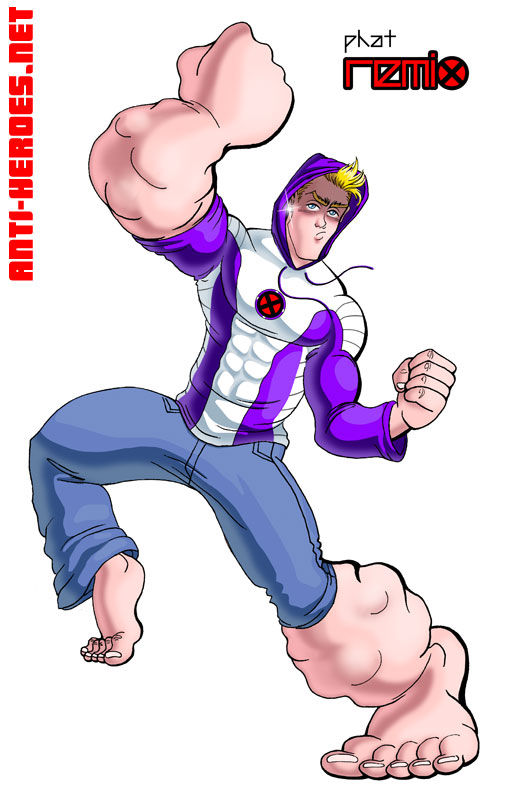 Perhaps one of the more jokey characters of the core long-lasting team, Phat, AKA Billy Bob Reily was a white guy who wanted to be black and was drawn like either Vanilla Ice or Eminem.

He didn’t have much to say that wasn’t more than a cliche for quite a while up until his revealing himself to be gay. In a bid to become more popular he and Vivisector pretend to come out and start to date. But when it doesn’t help his popularity, Phat goes back into the closet and his powers (to grow incredible amounts of malleable mass) stop working until… he comes out again, this time for real.

After he goes through that character arc, he’s offed because I guess Milligan can’t think of anything more to do with him. In his non-powered form though, he is really, really hot (I have a wigger/ chav fetish) and thusly one of my top faves. And to see just how PHAT I made his dong:
Anti-Heroes.net > Members Gallery > Fanboy Stuff. 😉 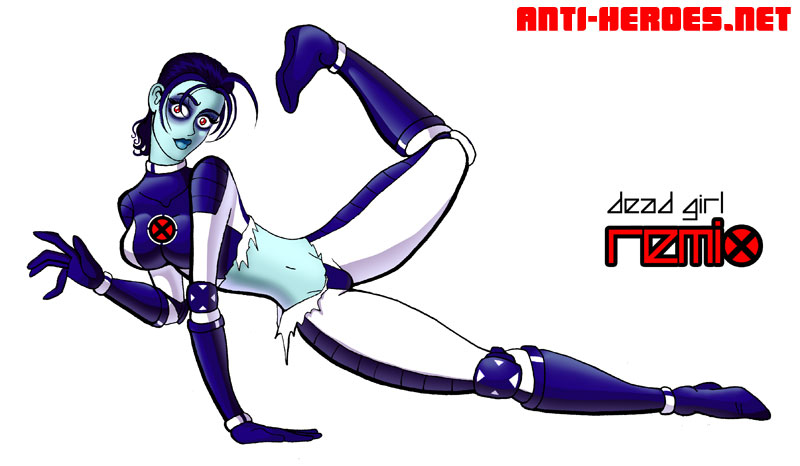 My aversion to zombies notwithstanding, I really liked Dead Girl. With her powers to communicate with the deceased and animate her own severed limbs, she was a little more cynical than the rest and just so hilarious, I couldn’t deny her. The fact that she becomes a model and glamour icon is one of the more particularly biting social commentaries of the series.

Dead Girl actually gets an eponymous limited series after X-Statix ends and I have to say, even though it’s the same creative team, the tone of this book was too silly for my tastes. It read like a sequel to Beetlejuice, even reusing some of the same jokes. Not a fan. 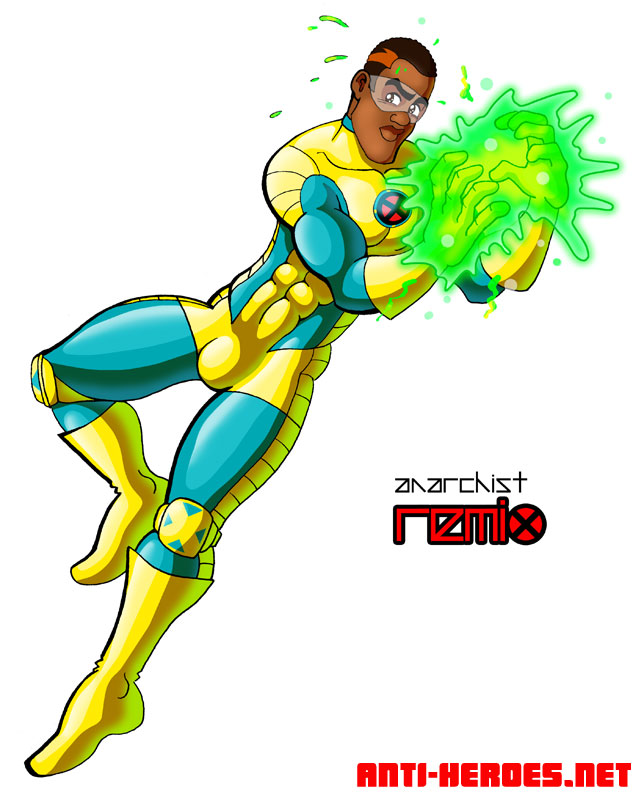 Tike Alicar, the apathetic, hot-headed, sometimes OCD afflicted, self-described “token black guy” of the group was written particularly well because it was soon revealed that his unruly nature was merely a ruse to get ratings. His power was to sweat acid and channel it as potent energy blasts. (Yea, I know, weird for the sake of being weird, but on a side-note, Milligan seemed obsessed with sweat in general, frequently mentioning it in various instances.)

I appreciated how they dealt with a storyline in which Anarchist was worried he’d be killed off when a younger, angrier black guy was allowed on the team. Actually, the topic of race was often explored in this title, and not just glossed over like other superhero books. Very refreshing and well-done.

And to see his cock, which is also refreshing and well-done (LOL),
Anti-Heroes.net > Members Gallery > Fanboy Stuff!